NPR Music released the following article today, written by Bob Boilen, regarding Amanda Palmer’s powerful new song and gorgeous music video regarding the Global refuge crisis. As you know, I am both a huge fan and proud Patreon supporter of Amanda Palmer (as mentioned in this blog post). Amanda's art and stories deserve to be shared. Her newest is no different, and I am happy to help spread the word. Keep reading below or click here to read the original article...

“This is the most powerful music video I've seen in ages. Inspired by the death of a child, in the midst of a huge refugee crisis, "In Harms Way" takes on a question that songwriter and singer Amanda Palmer says is absent from current political conversations: "Have we forgotten how to be generous?

Amanda sent these words and it best speaks to the message she hopes to convey in this song and video:

"The harrowing image of little Aylan Kurdi lying lifeless on the beach in Turkey was enough to thrust a song into me, but the real fuel was the video footage of his father, wailing in pain as the news filmed on. My own son was two weeks from being born. And my heart broke for Aylan, for his family, for what we, as a human family, seem to be unable to do for each other.

"While the media can't help but train its lenses on Trump and Weinstein, looming large and villainous in the foreground while we all try to find sanity and equality in this massively complicated political landscape, the constant shadow of the refugee crisis and climate change are threatening to devour the entire god**** picture.

"I worked on this song while I was overseas last spring, trying to understand things firsthand. I traveled to Lesvos, Greece, and worked with a small Dutch NGO called Because We Carry. It's a tiny team of people serving a camp called Kara Tepe, which houses mostly families. I took my son, Ash, who was almost two at the time, and we helped distribute breakfast to the tin boxes the size of small trucks that are sometimes crammed with a family of eight. We played soccer and shared ukulele songs with the kids. We danced. I've never seen a more generous group of children than these refugee kids, and that was one of the things that struck me deepest: We, as a group, have forgotten how to be generous – not just with our wallets and our policies – but with our imaginations. This could have been my life, my child, my story. I got to know some of the women there, particularly some of the Afghan ones, and I tried to understand the actual human story behind the viral photos.

"Meanwhile, I met the Spanish performance artist Abel Azcona – and his incredibly brave and controversial performance art – through mutual friends on Twitter, and our entire film collaboration (including arranging dozens of volunteers who traveled from all across Europe) took place because over 11,000 patrons via patreon.com have given me funding to work with. That means that I can make art at exactly the pace I want to, pair up with risky collaborators, and make far more uncertain and venturesome choices than I could when I was working with a label. Nowadays I can meet a wild-eyed artist on Twitter, send him a DM, and a few months later cut him a check – using my fans' money – to pay for a film crew and a boat rental for a video that doesn't even have a script or a deadline. I knew I couldn't make an ordinary music video for this song, and I took a leap of faith in Abel and his team to create something that fit.

"Because the Patreon funded the cost of the video itself, we are going to take 10% of the proceeds from the 7-inch single and 100% of the digital proceeds for the next month and pay them forward to Because We Carry. I can't tell you how profoundly liberating it feels to make art like this; to be able to work and respond so directly to the state of the world and other artists around me. It feels like a small but significant revolution in terms of the way artists can confront the massive political storm facing us right now. Because ultimately, art and music can do a way better job of creating change in the world when the art-makers can focus their time and passion on making the art instead of selling it." 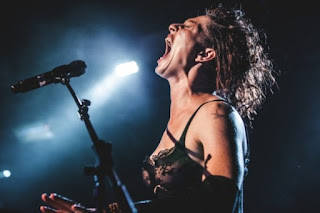