I arrived at the Q Center last Sunday morning to receive training from another, much older than I, volunteer. Mr. Devine, as I'll call him in this blog, sat behind the front desk with his stalky torso planted in the office chair and his legs rooted to the ground. His long grey beard covered his neck and his mustache just barely draped his top lip. Within the first 20 minutes of our conversation, I learned that Mr. Devine was in his early 60's, retired, gay, in a monogamous relationship for the past eight years and was originally from Ohio. He had moved to Portland two years prior and began volunteering the reception desk at the Q around the same time.

The Q Center is Portland's LGBTQ community center. For those of you who don't know, "LGBTQ" stands for "Lesbian, Gay, Bisexual, Transgender or Transexual, Queer and Questioning." It serves as a safe resource center, a support center and also hosts ones of the countries largest Queer libraries. Walking through it's front doors can be a big step for someone who is coming out, seeking help, needing support or showing that they are a friend or ally.

The Q also provides space for Alcoholics Anonymous and sex addicts meetings, bi, lesbian and trans support groups and special community events like holiday parties and even a wedding once. The main auditorium is rented out for special events as well as office space for an insurance company and The Portland Gay Yellow Pages. 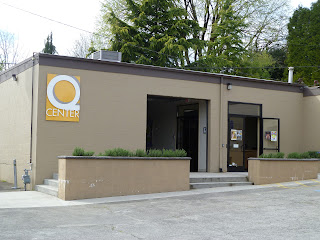 If it wasn't for volunteers who run the reception desk, the center wouldn't be able to unlock their doors. Paid staff and fundraising are key components to keep the non-profit running but the volunteers keep it operating. Along with new volunteers come fresh ideas, a few of which I am currently cultivating myself. I'm thinking about restarting their Open Mike Night, a Youth Arts & Crafts Afternoon and something that has never been done before, "Christmas at the Q!" I would be there to unlock the doors for a community gathering of LGBTQ's and friends of, who don't have families or who like myself, can not afford to travel home for the holiday.

Mr. Devine showed me how the building operates, how to lock and unlock the doors, control the heat, lights and entertainment center and told me about what he has encountered at the center. However, what I found most intriguing were his stories about spending a year in New York City when he was 21 in the 1970's before going back to The Buckeye State where he had previously lived and continued to live after.

I was awestruck. I mean, I've heard stories. I've read books and seen documentaries on the NYC sex shops, book stores, bath houses, gay bars, night life, Fire Island, AIDs and Stonewall but never have I ever met someone who lived that life style, in that time, in the city. Gay Rights were booming in the 60's and 70's in New York City, where culture was already diverse to the extreme, I can only imagine throwing the gays and their glitter into the mix. Along with (lots of) sex, (mixing) drugs and (dancing in leather to) Rock and Roll, hah, who am I kidding… it was Disco, straight up Disco, with the feather boas, lots of skin, mirror balls and strobe lights added to the setting, I would have died to be a fly on the wall for just one night… a fly, mainly because I wouldn't want to know why my boots were sticking to the floor.

I'm not sure if I'll ever hear more stories like the ones Mr. Devine shared. Some, I can't even share because I don't know who exactly reads this blog. But being interviewed, orientated, acclimated and trained, ready to volunteer at the PDX Q Center for 16 hours a month, for the next 10 months, I'm sure I will hear my fair share.
at 12:12 AM

Email ThisBlogThis!Share to TwitterShare to FacebookShare to Pinterest
Labels: Volunteering