“…There’s more than one answer to these questions, pointing us in a crooked line…”

Most everyone knows the song, Closer To Fine by the Indigo Girls. It’s been around longer than I have. Over the decades, Amy and Emily’s harmonies have evolved, but their love stories and messages of social justice remain consistent.

For sixteen years, I’ve been lucky enough to attend countless Indigo experiences. Rock concerts, festivals appearances, fundraisers, radio shows, and solo endeavors. Last night’s show was a full length acoustic set at the Kirkland Performance Center in Kirkland, Washington with a small capacity of 400. Having only been once before, I had forgotten that the tiny auditorium’s sound is as crisp as morning light.

Here is my run down of the show: 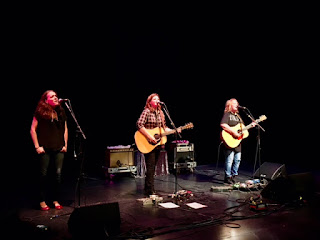 1. Fill It Up Again - Amy and Emily came out on their guitars and we’re greeted with Hawaiian leis. I missed the connection, but the flowers smelled beautiful from were I was sitting in the third row. “Better than I was smellin,” Amy said! Haha!

Lucy Wainright Roche sang back-up on almost every song filling in the sweetness that Emily’s voice carried in the ’90’s.

2. Devotion - This song always feels like it belongs in the beginning of the show.

4. Dairy Queen - So exciting! It’s been a while since I’ve seen this song and the suck-n-blow harmonica was back! People actually laughed at the first line “I heard that you were drunk and mean down at Dairy Queen” like they did when it first came out in 2003!

5. Elizabeth - Emily told us that she had flown to New York last night to see Jojo, who was a young singer from the early 2000’s. I guess Jojo fell victim to the music industry and had to lay dormant for years, but now she is back and Emily was very excited to support her. However, she acknowledged her jet lag looniness and joked, “Thats why you shouldn’t fly in the day of the show, but it’s more fun this way!”

6. Spread the Pain Around (aka Keg-o-wine) - Breathtaking. The sound in this venue is superb. After the song, Amy said, “Whenever I sing this in Seattle, I think of Eddie Vedder and Pearl Jam since I used the phrase “better man.” Then they bantered about how easy it is to rip off songs, but whenever they finally realize it in the writing process, they drop the song all together. Perfect segue into mentioning they are working on their new album. No details, but Emily mentioned she was working on a song she was really diggin, but realized it was the same song she had written the week before!

7. Get Out The Map - when the chorus came its like the entire audience had been holding in one collective sneeze that they were dying to get out like an explosive choir. This seemed like the crowd favorite of the entire night. You could tell that the ‘Girls were impressed with the crowd’s singing once everyone opened up for the rest of the show.

“…With every lesson learned a line upon your beautiful face
We’ll amuse ourselves one day with these memories we’ll trace
Get out the map, and lay your finger anywhere down…”

8. Three Hits - After the song, someone in the crowd yelled out “The John Song!” in reference to John, from the album, Beauty Queen Sister.
Emily: “Thats a good one! I should relearn it…… You said, John, right?”
Girl: “Yes! He’s here!”
Emily: …… words can’t describe the look on her face…..
Relieved Emily: “ Oh, you mean, a John is here?!
Girl: “YEA!”
Emily: Oof, you can’t do that to me, I take things very literally, and need time to process what I’m told. I was like… ‘no, that’s impossible!”

She was legit shook.

9. Able to Sing - Emily introduced this song as her political song. She explained the nursery rhyme reference, she sang the ‘4 and 20 Blackbirds’ song and related the birds to singing to the king for a change. “Truth into power,” she said!

10. Slo-Go - Since the symphony arrangement of Go, it’s very tame these days, but I loved that even though Amy was on her acoustic, Emily tore it up on Electric! This also may have been the first time we got some spit action from Amy.

11. Watershed - Did I mention how great the sound was in this place?!

12. Second Time Around - As Amy is grabbing the harmonica for this song, she introduced their new guitar tech, Jerry.
Amy: “He’s got a sprained left shoulder.”
Crowd: “Ohhhh…”
Amy: “I know. I think he was playing some bat game at the baseball game with his kid between the 7th and 8th inning. What was it? Chase the bat? I dunno, some traditional Texas game.”
Jerry: not responding.
Emily: “He’s focused on tuning.”
Amy: “Haha! Not listening! Anyway, he’s being a trooper. Must be the pain pills.”
Crowd laughs.
Amy: “I mean, he was holding it funny earlier, but now he seems fine.”
Crowd laughs.
Amy: “I shouldn’t make jokes about that….. I just can’t help myself.”
Crowd laughs.
Amy tunes her mandolin: “I almost hear it”
It’s not in tune. She shakes her head and exclaims: “Ah, Jerry!!!”
And from the side of the stage Jerry yells, “It’s the drugs!”

14. Sugar Tongue. This was my favorite part of the night. The song has another new arrangement with Amy on electric guitar and Emily on acoustic. You can tell they don’t have it flushed out yet though because Amy forgot some words and had to hum along. “I was so shocked I hit those high notes, I just forgot what I was doing!” She apologized after. Emily chirped that when those moments happen, they always go by so fast! This also may have been where the running joke of the night started - Emily was sassy and kept saying that things weren’t competitive, with a sly look in her eye that said otherwise. It came up twice and her timing was just hilarious!

15. Hope Alone. A shock and truly amazing! And Amy was on her 12 string guitar!

16. Shame On You. During the guitar handoff before the song, I hear Emily say to Jerry, “This is the one with the switch. Can you remember that?” She said it a few times, then joked into the mic that they were working on their logistics. When Jerry switched out Emily’s banjo for her electric guitar midway through the song, Amy yelled out, “Jerry’s big moment!!!” The crowd went nuts.

17. Hammond Song. Written by Lucy’s mom, the three-part harmony with her and the ‘Girls always gets me.

18. Jesus Was a Walkin’ Man. New Amy solo song from her upcoming album! Gospel, political, blunt, and with reference to “the wall”, it was well received, and people even clapped on beat.

Awesome set. My expectations have already been exceeded and this was only night 1 of 4! I also managed to get in a song request after the show. So send it up to the song Goddesses and maybe I’ll hear Point Hope for the first time this week!

I wouldn’t be who I am today without Amy Ray and Emily Saliers. They have continued to inspire me and lead me in all the right direct 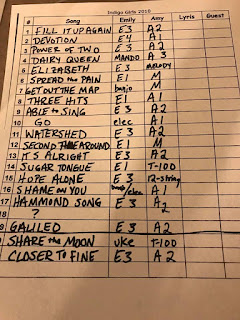